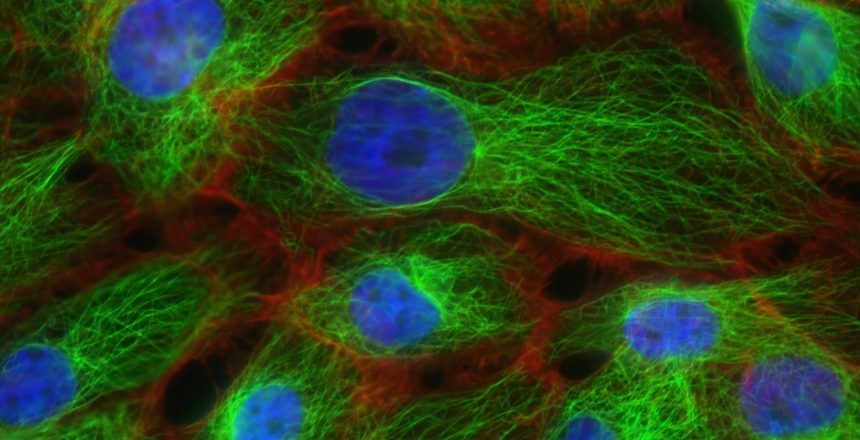 Immunocytochemistry (ICC) is very significant in cell sampling for disease diagnosis and evaluation. Imagine you’re a scientist who has been given a cell sample from a patient with a recently diagnosed disease such as lung cancer, immunocytochemistry is the technique you would employ to detect the antigens in that cell sample. Unlike a tissue sample, a cell sample is done by taking a small sample of cells from, for example, the cheek and then grow these cells in a controlled environment. To better understand the disease, antigens (toxic substances which trigger an immune response) can then be isolated within this sample, using immunocytochemistry (ICC).

Immunocytochemistry allows scientists to identify whether a particular antigen is located within an individual cell, enabling observation and labeling of the antigens.  This technique can detect antigens present in a cell with the help of antibodies and fluorescence microscopy. Antibodies are proteins produced or secreted by white blood cells, known as plasma cells, as a function of the immune system. Antibodies are already primed to bind to antibodies due to their nature as a component of the immune system, but to visualize this binding, a ‘marker’ molecule, often fluorophore, can be attached to the antibody which fluoresces under UV light. This reaction can be viewed under a microscope to determine if the targeted antigen is present in a sample of cells. If needed, ICC can also be used to identify the specific cellular component that the antigen inhabits.

The Process of Immunocytochemistry

There are four major steps in the Immunocytochemistry process, and they include;

There are two types of Immunocytochemistry (ICC) namely; direct and indirect, and they differ only in the way the marker molecule is attached to the antibody.

Direct ICC – the fluorophore is connected directly to the primary antibody, thus eliminating the need for any secondary antibodies.

Antigen Location and Why it Matters

With the proper use of ICC, the ability to visualize any sought-after antigen or protein within a cell is theoretically possible. ICC’s ability to recognize and pinpoint specific proteins within a cell provides an opportunity for medical advancement by offering an enhanced way to observe the inside components of a cell. For diseases such as cancer, ICC presents a possible preventative method. For example, workers who could be exposed to high levels of carcinogens in the workplace can be screened for unsafe contamination levels. This would enable proactive measures to be taken to prevent cancer. In one study, the results of ICC were used to help healthcare researchers determine what course of the treatment plan to suggest to doctors. This is based on the insight that they gain by learning the location of the toxic substances in the patients’ cells at a certain point in time.